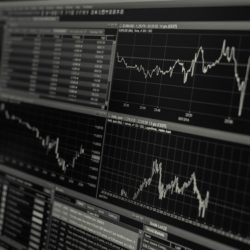 Following the resignation of Gary Cohn, US top economic advisor, the S&P 500 dropped almost 2% after hours. Although it is always hard to attribute market moves to one event, many believe that Cohn’s resignation had a part to play in the slide. But, if you would have sold on that news, you would have been forgetting one of the largest and most powerful market drivers, the concept of the reversion to the mean.

Events in the short term like Cohn’s resignation or large long-term events like exciting emerging markets, gold prices, or Bitcoin, booms are usually followed with periods of retracing. These movements show how markets act as a spring returning swings and volatile events, in the long run, back to the mean. When markets get too inflated or deflated over weeks or months or even years, there is normally a retracing and subsequent overcorrection with a settling to the mean. To illustrate this, we can look a bit closer to this recent small-scale event.

Gary Cohn, former Goldman Sachs Executive, left the White House earlier this month following differences between his and the President’s outlook on economic policy. Primarily it was his concern over the President’s protectionist policies and whether they would be hurtful enough to ignite a trade war. This resignation happened during a huge turnover of many White House staff members. When there is high turnover in the White House and doubt in foreign and economic policy volatility and uncertainty will follow. Since the start of the year, the market has become more and more volatile, we have seen a rise in volatility indexes and many people unsure about economic futures. This volatility can be seen in the huge shifts between opening to closing bells. But even with these huge shifts and volatility, we can see that the market does not veer far from averages.

As you can see in the graph attached, the price of the S&P had a huge fall from the close on 3/6 and the open on 3/7. This fall was later completely made up during the day and the market then closed on 3/7 in the green. Even during the day, you can see that there is constant fluctuation with constant mean reversion.

This week President Trump was at it again on Twitter launching trade war silos that turned the market into panic-mode Thursday and Friday as the Dow tumbled close to 5%. Remember markets panic first then think later; as Vanguard shared on Thursday it’s very unlikely there will really be a global trade war, and as investors catch their breath digest economic data we expect a reversion to the mean as the market bounces back to equilibrium. The magic of mean reversion is that it can be at any scale.

What is ‘Mean Reversion’ Anyway?

Mean reversion can work on very large scales spanning years or decades. When people talk about markets moving in cycles, they are referring in one way or another to mean reversions. Markets are constantly evolving and changing, taste change, technologies are invented, and the market needs to react. In many cases, new technologies (think Bitcoin) lead to huge speculation and optimism. This optimism can fuel a stock price jump or can fuel a frenzy similar to the Dotcom bubble’s formation. These prices get hugely inflated, far from what they might actually and responsibly be worth, leading to a sell of driving prices below the mean and thus creating another buy cycle. As you can see, there would, in theory, be volatility but that volatility would always revolve around the mean and would revert to a mean price in the long run.

You might think to yourself, “Trading on these swings could be big money” but unfortunately trying to time the market, in any way, will usually lead to a loss via both volatility and trading fees. This strategy is akin to a classic financial joke, “Two economists walk down the street and one says ‘oh look, there’s a $100 bill; and the other says ‘don’t bother, if there were one it’d have been picked up by now’”. If there was a chance for arbitrage or if the market followed perfect patterns then some MIT grad would have made an algorithm to trade on those patterns, and thus corrected the market himself.

This constant reversion and invisible hand are what makes markets so amazing.

In a perfect market, there are no inefficiencies or incongruities. Although we are not in a perfect market, we are in a pretty good one and we can rely on long-standing effects like the reversion to the mean and compound interests to passively watch a diverse set of assets stick close to the mean and increase. John Bogle, the founder of Vanguard, is famous for saying,

The boom and the bust were normal—just two more swings in stock returns over the past century. Reversion to the mean is the iron rule of the financial markets.

We cannot predict the exact movements of the market, but we can look at history to give us glimpses of what the future might hold. History has shown us that investing in the market and holding positions will weather most any storm and give better returns than trying to pick individual winners.

At M3 Wealth Advisors, we believe in betting on the economy as a whole. The laws of Mean Reversion show that when price anomalies occur, things eventually settle back to earth. Why take on immense risk finding that needle in the haystack when you could just buy every bale of hay on the farm? Over time the economy will continue to grow providing a return, in the long run, all you need to do is decide how much risk you want to take on and then jump in.

To learn more about understanding your risk tolerance check out our free questionnaire:

What's the scoop on IRAs?

What are factor ETFs and why do they matter?